I have seen a handful of “positive reinforcement” trainers lure dogs into big trouble.

There’s nothing inherently wrong with food lures. They aren’t harmful to the dog, most dogs find them pleasant (ooh a cookie!) and they provide us opportunities to reward our dogs for a behavior that we want. I use food lures in training, for client dogs and my own.

There are a few problems with food lures:

Those are easy problems to solve, with the right application of markers and rewards. (Meaning “yes!” or *click* and a cookie.) They aren’t the problem I have with food lures, and that’s not where the trouble comes.

Let’s say we have a young German shepherd in his first class with agility equipment. He’s a confident dog in general but he’s nervous about heights and things moving underneath his feet. Some of the agility equipment is kind of creepy to him because he’s not used to it. He’s a little uncertain.

A well-meaning trainer says, okay, let’s use food to get him used to the equipment. You, the owner, are instructed to hold onto the dog’s collar to keep them steady while the trainer shows the dog a piece of chicken.

Chicken! That’s an exciting treat. Even though the dog is a little uncertain, he follows the chicken. They go up the a-frame. For part of the distance–about two and a half feet–the chicken is more exciting than the height is scary. At four feet the chicken starts to lose its shine. At the top of the a-frame, the dog finally really notices where he is. Holy hell, how did he get up here? Oh my god, how does he get DOWN? He no longer wants the chicken much, if at all. He wants to get the heck away from this scary nonsense!

This dog’s body language indicates he might not be super comfortable up there.

I’ve seen this dog jump from the top of the a-frame more than once.

Now: what is that dog’s experience of the a-frame? Was that food lure a positive thing?

My example may seem extreme, but it’s not. It’s an otherwise-confident, healthy dog in a circumstance I’ve seen more than once. But it can be a lot more subtle, with no obvious traumatic experiences. Instead, it’s just a low level of discomfort that’s never really trained out. Think of this–how many agility dogs don’t like the teeter? How many slow down and cross the a-frame and dogwalk cautiously? They may have not shown such obvious signs of anxiety in training, because the value of the chicken may have been worth more than the strength of their fear. But the fear is still there–and unless that fear is conditioned out, it sticks to the obstacles forever. 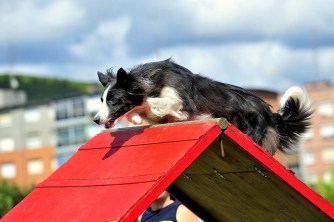 This dog is totally comfortable and confident on this equipment. He’s also willing to go a lot faster!

Most people come to my Parkour classes without many expectations. Parkour is kind of new, and it’s accessible to pet people and dog sports people both. There’s no competition or courses. It’s easy to focus on making sure we don’t lure our dogs into trouble.

For one thing, I keep an eye out for the Cookie Hounds. You know if you have one, because if there’s a cookie in your hand, they’re trying to get it out! They stare, their noses are stuck to the cookie–and they aren’t thinking about what they’re doing. They’re just thinking about the cookie!

Even if a Cookie Hound seems pretty confident, I want their handlers to get the food out of their hands as soon as possible. Why, if the dog isn’t scared? Because we don’t always know when our dogs will suddenly discover something that creeps them out. In Parkour, we’re always playing with new surfaces and new uses for items. Even highly confident dogs–even my own adrenaline junkies!–occasionally discover a texture, movement or shape that makes them pause. In those moments, what’s better: a dog that stops and thinks about whether they are comfortable doing something, or a dog that follows its nose until, oops, something freaky happens?

The awesome thing is, if you give even a very timid dog a chance to think about what they’re doing, and you reward them for small attempts, they’ll usually decide they CAN do the scary thing.

That German shepherd from my example? I wouldn’t ask him to do a full-height a-frame. All a-frames lower, and some can even be flattened onto the ground. I would lower the height and get him very, very happy about running over the frame on the ground, and then at a low height, and gradually lift the frame up to full height over several weeks or months. Does this take longer? At first, yes. But how much longer does it take to explain to a dog that, okay, even though the a-frame scared the crap out of them and maybe even hurt them the first time (if they jumped), it probably, maybe, won’t be as bad this time?

Why involve fear in our games with our dogs in the first place?

So that’s why luring isn’t always a positive experience for the dog. It’s easy for a dog to get tricked into scary situations if they’re staring at something delicious. Heck, I would follow carrot cake with cream cheese frosting into a shed full of spiders… for a few steps, at least. But would I like it? Heck no. It’s our job to make sure we’re training our dogs in happy confidence.