I have been at square one with this dog so many times. Even for someone as committed as I am, it has been a rocky road. I have cried, hard, over her more than I have over any other relationship. She has saved me from myself. She has broken my heart. She has changed me into who I always wanted to be.

I hadn’t had a dog since I was a kid. I wasn’t sure I could handle a border collie, even though I’d fantasized about one since childhood. I thought, maybe a boxer? Or a Doberman. I loved the way Dobermans looked.

She was listed as a Doberman/shepherd mix. I saw her photo and thought, those ears. I had to see her. 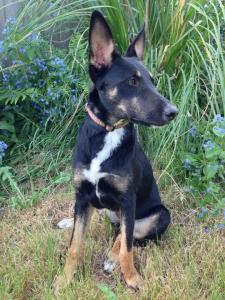 She was called Gabriella at the moment. The lady at the rescue had found her in a shelter in Yakima, where her name had been Tulip. She was a stray. She’d only recently been spayed. When the lady let her into the front room where her two gigantic male Great Danes lounged on loveseats I thought, she’s so tiny. It was a trick of perspective that I would grow used to: she expands to fill available space, like a gas.

“She’s great on the leash,” the lady said as she slipped the teeth of the prong collar into place.

She pulled on the prong collar. Especially when we walked past a yard with a cat in it. That was the one moment I wasn’t sure about our future together: she tensed, her body language intense and focused. I wasn’t sure if I was about to have thirty-five pounds of underweight, muscly puppy kill machine on my hands or what. I hadn’t even walked a dog in years.

She barked and lunged. Her tail wagged. I figured, well, at least she wagged. I could deal with that.

Really, I was sold when I saw those ears.

Vespertilio, the Latin for bat. The ears. It means “evening flapper,” which is ridiculous, so I just went with the “evening” bit.

I had wanted an agility dog, but Vesper was more potential than actual agility dog. I thought her long legs and fearlessness would work to her advantage, but she was severely reactive. People and dogs set her off from two blocks away. She learned incredibly quickly, but her emotional reactions were so violent I couldn’t take her anywhere.

It was a lot of work, a lot of learning. I hunted for resources. I read every positive training method book in the Seattle Public Library–literally–and a few “balanced trainer” books to see why people still stuck with that stuff. I joined expensive online classes, worth it and not worth it. I took an excellent puppy class where Vesper and I were blocked off into a corner with visual barriers so that she would stop lunging and screaming at the other dogs.

I was having so much fun with her. Even though my puppy was a very wild puppy, even though she required at least thirty minutes of play and training in the morning and twice that in the evening, even though she was so much crazier than any border collie I’d ever met, she was exactly what I’d never known I wanted. That’s how it often works with first dogs.

It took us a year of dedicated, focused work to get Vesper’s recall and reactivity to a point where she could work around other dogs. She took to agility exactly like I thought she would: she was a natural.

Once we got into competition, though, I had two different dogs. One run she’d be perfect. The next, I could see her overload and break, and then she’d stress-zoom, jump on the judge, run wild. She quickly moved out of Novice and into Open, but things deteriorated fast after that, until I had a dog that would do two obstacles and then run out of the ring without me.

Stop. I pulled her from trialing. Back to the beginning. We worked on focus again. I learned more about engagement and how to be more interesting to V than what was going on outside the ring. I realized how stressed she was in trial situations; my fearless, outgoing dog needed more confidence. We entered NADAC Intro runs so she could do short courses and succeed. We did tunnelers. We did things that were mentally very easy so we could focus instead on Vesper’s emotional state. I learned how to go into the ring without any nerves at all; how to play the game like it was just a game.

We were at a practice facility doing speed circles one night and Vesper wouldn’t take the jumps. I thought maybe she was tired, or distracted. It was very, very abnormal for her to miss a jump.

A couple days later she woke me up in the middle of the night, crying. I thought at first something was wrong with her neurologically, because she didn’t seem to be able to stand.

The emergency vet said, oh, she’s probably just stubbed a toe. I knew he was wrong.

Stop. Our rehab vet figured it out quickly. Her rotator cuff was injured, possibly torn. She might never chase a ball again, if we couldn’t rehab her back into shape. She might never do agility again. She went on crate rest–confinement, basically–immediately. We ordered her a pair of hobbles, a vest that tied her upper legs together so she couldn’t move her shoulders too widely and could only penguin-walk with her front feet.

If Vesper could never run again, I thought, then we needed to have a serious talk about Vesper’s quality of life.

The hope was that, with four months of intensive rehabilitation, Vesper would recover without surgery.

Stop. That didn’t happen. Thank god she has good insurance. Vesper’s awesome rehab team at Sunset Hill worked with the Canapps to surgically repair her shoulder five months after the emergency vet told me she’d stubbed a toe.

Vesper came home and went back into the hobbles.

It was nine months after that first night that our vet told me we could take the hobbles off. It took a year before I was confident enough to ask her to weave again. A year without any agility at all left V with some rusty skills, but we started slow and she remembered a lot.

I’d always disliked her aframe performance though. She’d thud hard into the upside and slam into a two-on, two-off at the bottom, no regard at all for ergonomics there. With her speed, it had to be hard on her shoulders. I read about straight-fronted dogs injuring themselves on the aframe. I’d never known anything about structure in dogs before, but now was a good time to learn. Vesper definitely had a straight front.

Stop. I was going to have to fix her aframe. That should be easy.

In order to fix it, first I had to break it, and that was no problem at all: she just wasn’t required to have any criteria anymore. But convincing her to do a running aframe was something else entirely. Stride regulators worked, but as soon as they disappeared so did her critera.

I bought an aframe and set it up in our yard.

We trialed anyway, with her unreliable contacts, and still managed to win some USDAA steeplechase rounds. She did great in jumpers. She was fast again. Her weaves were beautiful. We were starting to come together. I discovered the yoga mat running contact method and that made a lot more sense to Vesper. She got more consistent. We both got more confident.

We were doing pretty well. I was so proud of us.

The tailio, it is blurred.

We bought a house. I left for six weeks and came back.I published my first pieces of fiction. We got a puppy. We trialed a lot. I drove to Sumner one day a week and Mount Vernon another day a week because the teachers in Sumner and Mount Vernon were both so good, I couldn’t give either up.

Vesper told me, in a few subtle ways, that something was changing. I was very busy. I wasn’t paying close enough attention, or maybe the signals were too subtle. The puppy and my writing were taking up a lot of my time.

At an agility event, Vesper jumped the fence and attacked and mauled a bystander’s dog.

Nothing could say more plainly to me, as a handler and trainer, that I have missed my dog’s signals. I ignored something important, somewhere. I put her somewhere she should not be.

It was an intense experience for me, but I am almost grateful for it.

I think it is what made me a dog trainer.

Before this, I was an agility person. But now I have this dog, with whom I am deeply in love with, who is dog-of-my-heart, who is not only a danger to other dogs, but also desperately needs something to do with herself. 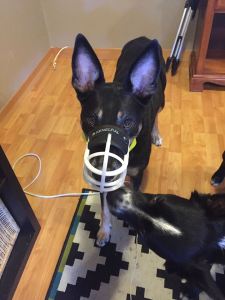 Look at Hannibal Lecter over here.

Management has been the priority first. Vesper has always been good about wearing things, and she was conditioned to wear a head halter as a puppy, so transferring that value to a basket muzzle wasn’t hard. She likes the muzzle because it means we are going to go somewhere fun.

She sees a veterinary behaviorist. She’s on an SSRI. She wears a bandana spritzed with Adaptil. I manage the living shit out of her. (Hey people, when you see someone working with a reactive dog, give them a shout. “You’re doing good work!” It means a hell of a lot to us, because this stuff gets exhausting and it can last a lifetime.)

Fortunately, Vesper is the sort of person who is naturally talented at pretty much everything. Lure coursing, barn hunt, nosework. My goal, which feels almost insurmountable, is to get her CGC. It seems almost like a joke as she’s the opposite of a good citizen, but the thing is: I really do believe in us. She has made me so much better as a trainer. She has made me so much more aware. We have already done things we were told we wouldn’t ever be able to do.

I have never been a patient person. I have a lot of patience, though. It’s amazing what unconditional love can do to a person.